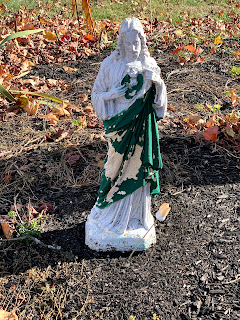 As Hakuin Zenji sings in his Song of Zazen:  "All beings by nature are Buddhas, as ice by nature is water." Training the perceptual mind to see everything as an example of the awakened heart takes some work:  we have to let many of our old rigidly held patterns around differentiation, especially our certainty about right and wrong, you and me, this and that,  life and death, Buddha and not-Buddha, become looser.

While there are indeed different qualities to  everything we encounter, and it's vitally important not to ignore differentiation, there is another view which can provide some delight to the discouraged heart in difficult times.  A friend recently told me that she had realized, in mourning a beloved parent, that even though on one level her parent was definitely dead, on another level they weren't.  She said to me, "there is no life and death!"  Her parent is definitely gone from any ordinary way of perceiving a person, but she realized that everyone she meets, alive or dead, is like this.  Her parent was once a baby, once a child, ultimately old and ill.  All of these versions of her parent were true.  And this perception applies to living people, too.  She had discovered the truth of the teachings for herself.  In the Mahayana (Great Vehicle) teachings the historical Buddha, who died 2600 years ago, is still alive, and takes an infinite variety of forms, populating the Buddha fields, which can be perceived everywhere.

My two-year-old grandson is learning about Buddhas -- he got a plushy toy version for his birthday.  This is a Buddha who needs kisses and also has to brush his teeth.  He needs to be greeted with a cheerful, "hi Buddha!"  For many months he has been seeing Buddha statues, as well as Christian statues like the one pictured above, as different versions of Buddha.  He sees Buddhas everywhere.  As his process of ego-development and learning about differentiation continues to develop, I wonder if he will retain this freshness, and say "hi Buddha" everywhere he goes, to every religious statue he encounters.  Whatever happens to him, and to my grieving friend, they inspire me to remember to see all beings as Buddha and to see Buddhas everywhere.

Posted by Melissa Myozen Blacker at 9:29 AM