I gave a talk recently about two apparently contradictory teachings in Zen.  The first is that, even though we don't know it, we're already Buddhas.  That is, we're awakened ones -- the word "Buddha" coming from a root in Sanskrit that means "awake."  The second teaching is that we never have enough information to make fully informed choices about how to behave in ways that cause no harm, no matter how awake we are.  The information we need is way too big to comprehend with our limited neural equipment -- we're always missing something crucial.   So -- we're always screwing up.  And...(this is the part that's hard to comprehend)...this screwing up is Buddha activity.

As much as we'd like to make exceptions to this, because, really, we'd so much rather be kind, generous, loving and wise all the time -- not to mention calm and peaceful -- our major task as persons of the Way is to accept our human-ness...which includes greed, anger, ignorance and all the other emotions, thoughts and behaviors that we'd rather not feel, think or do.

How to cope with this paradox?

It's very simple, really, although not easy...we rely on the practice of vow and repentance.  We vow to do our best, and then, when we make our inevitable mistakes, we repent.  We recognize that we have done harm, and then we vow again to have as big a view as possible under the circumstances, so that maybe the next time....and on and on, endlessly, forever.

Lately I've been receiving mail from people in prison, who want to have someone to write to about their meditation practice.  I have to admit that I'm intrigued by these letters, hand-written on lined paper.  In these days of emails and instant messaging, it's remarkable to communicate in this old-fashioned way.

My first question to my correspondants has to do with what got them into prison in the first place.  I figure, if they'll tell me honestly about this, there's a smaller chance that they'll hide from who they are.  For me, becoming a student of the Way entails developing a ruthless honesty about all the parts of ourselves -- our shames and secrets as well as our more benign qualities.

The answers to these questions, when they eventually arrive, are sobering and heart-breaking.  Each person has a tale to tell, and each story is a mirrored reflection of the great suffering that fills the world.  Parental abuse, sexual trauma, drug and alcohol use, petty crimes escalating into major crimes -- theft, rape, violence of all kinds against all kinds of people.   Two of the letter-writers are serving life sentences for murder.

Some are in denial, of a sort -- they protest their innocence.  Some abuse meditation as they abused drugs and alcohol, as a way to hide from the reality of their remorse and their deep, almost unfathomable sorrow for the harm they've done, to others and to themselves.  But one prisoner, in particular, has impressed me with his devotion to meditation as a gate-way to waking up, to all that he's done and who he has been in the world.  He practices "just sitting" and recognizes that everything that he experiences, terrible thoughts and emotions, the reliability of the breath and the body, the utter despair that arises often, are all a part of the awakened mind.  He has, somehow or other, through other dharma correspondants and visitors, through books, and through the power of the practice itself, discovered something -- how to be awake even in hell.  I admire him and bow to him.  My own petty moods and disturbances seem so minor in comparison, and I feel so arbitrarily lucky for all the causes and conditions that have brought me to this current life as a person practicing being present to this surprising life.
Posted by Melissa Myozen Blacker at 1:54 PM 2 comments: 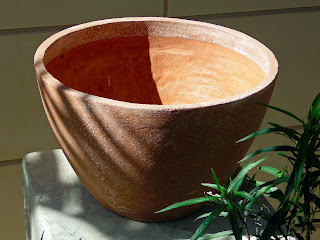 After being on retreat for three weeks, I'm catching up on medical appointments.  As I get closer to 60, I'm noticing all there is to do to maintain this human form.  Monday i saw my primary care physician, Tuesday my dental hygienist, and today I had my eyes examined, dilated, stained, and photographed and saw my ophthalmologist   According to all of these wonderful people who regularly examine parts of my body, I'm doing very well for my age -- as fit as can be expected.  But of course, this fitness comes and goes.  Cholesterol levels, blood glucose levels, weight and blood pressure rise and fall.  My father died at age 55 of a stroke after some heart attacks, so my physician is cautious with me.  My family history of gum disease always plays a role in my dentist's concerns about my gums receding, and my myopic, dry eyes need daily care -- glaucoma or a detached retina might be right around the corner.

According to a note to a koan in the collection Entangling Vines (recently translated by Thomas Kirchner in an elegant new Wisdom edition), the term "brittle bowl" is used by Xuefeng to describe the human body.  The Chinese word he uses literally refers to a "bowl that was fired from clay containing sand and that was therefore easily cracked or broken."  When Ying'an Tanhua asked Mian Xianjie of Tiantong, "What is the True Eye of the Dharma?"  (or, what is the eye of enlightenment that can discern the true nature of reality) Mian answered, "A brittle bowl."

Brittle indeed -- easily cracked, gone in a moment, in need of constant care.  And the only vehicle for coming to understand the true nature of this world -- capable of holding anything, nourishment of all kinds.  It doesn't always feel lucky to be born a human -- sometimes it feels like an intolerable burden.  But the promise of the brittle bowl is always present, ready to be filled and fulfilled.


Posted by Melissa Myozen Blacker at 12:25 PM No comments: 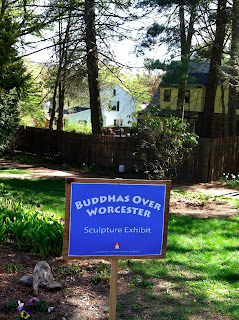 On Saturday the Temple hosted an art event called "Buddhas Over Worcester."  Fifteen local artists made sculptures that demonstrated their understanding of the spirit of awakening.  Over 100 Buddhas, disguised as visitors to the Temple garden, walked around throughout the afternoon to view these amazing works of art, which will be on display through July 5.  Here are a few scenes from the day, including one of my favorite examples of Buddha nature, not herself an official entry.  Her father is a refugee from Bhutan, and he contributed a carving, in marble, of the traditional Buddha.  While he is not a Buddhist himself, (he and his family practice a native Bhutanese religion), his actual name happens to be Buddha, much in the spirit of people from Spanish-speaking countries who are named Jesus.  Our true nature always shines through, whatever our name might be.  As the koan goes, when Huichao asked, "What is Buddha?"  his teacher replied, "you are Huichao!" 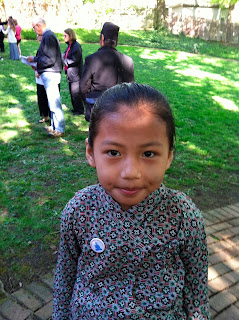 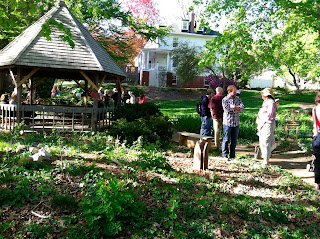 Talks from sesshin and the ango

All of the talks given in April at our ango and sesshin are now available on-line.  Enjoy!

Posted by Melissa Myozen Blacker at 2:03 PM No comments: