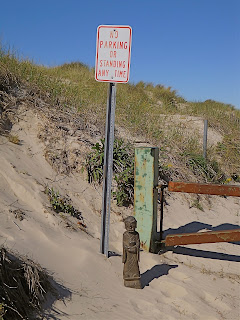 In less than 22 hours, I'll be leaving the Temple, on my way to teach retreats in Finland and Austria, with some stop-overs in Germany and Switzerland.  While I'm gone, the Temple will continue to function as usual, held lovingly by the sangha and its leaders.

Preparing for a trip always means, for me, letting go of the endless to-do list.  There is never enough time to do everything I feel "should" be done before I go, and so the last day ends up being an avalanche of decisions -- this is important, this is not important.  By the time I am on my way to the airport, everything has moved into the "not important" column.

And what a relief this is.  It feels a little bit like preparing for death -- the slow, expected kind of death, not a sudden violence and final end.  There is no preparation for that quick good-bye, except to live a life where every moment is important, and there is nothing to do but be.

To travel is to enter the land of hurry up and wait.  Who knows what will happen?  The itenerary on my plane ticket is simply a map, and as we all know, the map is not the territory.  And so my plans include a little death, not the final one -- a death of what I think I should do.  Off I go to the land of being.  Au revoir!
Posted by Melissa Myozen Blacker at 11:43 AM No comments:


How lovely -- the Temple radiates with the past presence of 38 intrepid Zen meditators.  Our summer sesshin ended yesterday, and yet, some feeling persists.  How lucky to be able to practice the Great Way together! 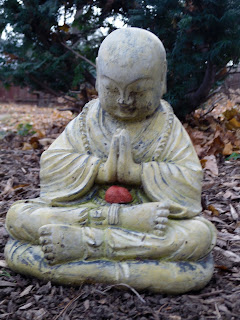 Posted by Melissa Myozen Blacker at 11:37 AM No comments:


I've been reading a book about "consciousness-only" Buddhism called "Living Yogacara" by Tagawa Shun'ei, and really enjoying getting to know more about this system of early Mahayana Buddhist thought that ultimately had a big influence on Zen.  Many of the ideas that I've come to take for granted in Zen, especially the system of consciousnesses that include the 5 senses, plus thinking as the 6th, and then the 7th (unconscious) consciousness where the concept of self lives, and the 8th storehouse consciousness, which is so similar to the Jungian concept of the collective unconscious, originate in the speculations of the Yogacarans.

And then, towards the end of the book, my enthusiasm took a sharp dive.  It turns out that, unlike my style of Zen, where we rely on the understanding that practice is enlightenment, and that, like Universalists, everyone is already "saved" -- that is, already a Buddha, an awakened being whose true nature is hidden from us by our blindness to the real meaning of Buddha nature,  Yogacara says there are 5 kinds of categories of people, and one of them is incapable of awakening to Buddhahood.  Whoa nelly, I said to myself when I came to this part of the book (yes, my own 6th consciousness sometimes talks to itself in arcane ways.)  What's going on here?

Of course, this theory wasn't just a problem for me, and I was relieved to see all the twists and turns that other people took to reconcile this teaching with other Buddhist teachings about liberation.  My favorite twister and turner is Jokei, who came to realize that he must be one of those people in the 5th category who will never become a Buddha, and that, therefore, because he knows this about himself, the motivation to do everything he can to become a Buddha comes alive in him, and he is therefore really in the category of someone who can become a Buddha.

Twisted logic, but there's something sweet and human about all this.  It's really, really hard to believe, for most of this, that with all our greed, anger, ignorance and various foibles and failures, we are already Buddhas.  So Jokei's logic fits our secret belief that, while everyone else is a Buddha (or, in Buddhist schools where striving for enlightenment plays a role, as it does in Yogacara, capable of achieving Buddhahood), we are probably the one exception.

So, in Jokei's words, "by means of none other than my foolishness, I know my possession of the Great Vehicle nature...how could I possibly be lacking the buddha-nature?"

My hope for Jokei, and for myself, and for all of us, is that, by whatever means necessary, we all come to this realization.  When the filters that blind us drop from our eyes, we see that Buddhas are everywhere.
And they look like us!

Posted by Melissa Myozen Blacker at 2:00 PM No comments:

Stories and The End: Dharma teachings from Canada (and Hollywood)

Over the last two days, I've seen two very different movies.  "Stories We Tell" is more or less a documentary, made by the Canadian actor and director Sarah Polley, about her discovery of the identity of her biological father.  Seth Rogen, also a Canadian actor and director, brings us "This is the End."   Rogen's film is more or less not a documentary, and follows the story of real, well-known actors, playing versions of themselves, as they face the Apocalypse.

Both movies were made by young artists who use the conventions of story-telling in wildly playful ways.  Any expectations we may be holding about reality, narrative, behavior and morality are all turned around, again and again.  The narrative structure of Polley's movie moves in spirals, as she interviews family and friends about the events of her late mother's life.  Three times at least, the movie takes some sharp turns as the reality she has presented to us is shown to be partial and, in some cases, incorrect.

In "This is the End" the narrative is more straight-forward, but also endlessly surprising.  In both films, we think we understand the personalities and behaviors of various characters, and then our understanding shifts.  In "Stories We Tell" I actually gasped at one point, and laughed a little at other points.   In Rogen's movie,  I laughed a lot.

I was impressed and moved by Polley's movie, but I didn't really enjoy it.  When I left the theater, I felt mentally and emotionally disoriented and a little bit nauseated.  And in the days that have followed, images of the people and events continue to play in my mind.  Her attempt to show us how we construct narrative and meaning is very similar to my understanding of the true nature of  memory -- endlessly re-creating itself.  It was a full meal, and I'm still digesting it.  In many ways, it's a great piece of art, skillfully put together, beautiful at times and disturbing in important ways.

I throughly enjoyed Rogen's movie, but it's not a great movie in the same way that Polley's is.   Even in its gory, shocking and violent moments, I was never disturbed.  I felt safe and delighted.   And, although "This is the End" does raise some questions about the nature of redemption, love and ethical behavior, any time spent in being philosophical is time wasted -- a distraction from the main point: simple entertainment.

Both directors manipulate us, one to make us question reality, the other to be unquestioningly amused.  I appreciate both intentions, and recognize these two styles as ways of teaching the Dharma -- disorientation and playfulness are tools in my own teaching repertoire.   My preference is some mixture of both styles, set on a base of compassion for all of us who tell stories, make memories and try to figure out the meaning of life.


I was inspired to write a short reflection on aging by the lovely one posted today by my teacher James Ford on his Monkey Mind blog.  (If you don't know Monkey Mind, you're in for a treat...Plus, there's a video of Frank Sinatra.)

Being quite youthful myself -- only 59 -- I can feel myself tipping steadily -- or is it unsteadily? -- into my 60th year.  Younger people seem to project more mother-like attributes than sister-like ones onto me.  And my recovery from physical injuries and illnesses seems impossibly slower than I ever remember.  Death is clearly approaching, softening me up for the ultimate fall.

Of course, the positive side of the approach to 60 years is that my recovery from emotional injuries is much more rapid.  This may have something to do with the seemingly endless hours spent in meditation over the decades, sitting still and coming to terms with all the nonsense produced by my mind and heart, but who knows?

All I really know is that I truly appreciate the helpful road signs posted by the good people of North Wales.  Consider yourself warned.
Posted by Melissa Myozen Blacker at 1:40 PM No comments:

A Dog! The Buddha Nature!


Here is a lovely video of my teacher, James Ford, talking about how to engage in koan practice.  I agree with every word and gesture!  Thanks James...