What's Going to Happen Next?

More from our conversation with Tom Hall of ImprovLive 365.
Posted by Melissa Myozen Blacker at 5:58 AM No comments:

Here's the latest video from Tom Hall of ImprovLive365 who interviewed David and me for his website:
Posted by Melissa Myozen Blacker at 7:22 AM No comments:

A glimpse of awakened presence


A long time ago, a Zen teacher told me that the world was made for me.  And a Tibetan teacher once said that the world is kindly bent to ease us.  I'm pretty sure that these teachers weren't talking about someone who  actually created the world with me in mind, to make my life easier and more meaningful.   But I do sometimes have experiences of direct perception, when nothing gets in the way of my senses, and at these moments I do feel that the world as it appears to me is me.  My judging, evaluating mind usually sets up an imaginary wall  between me and the world.  In meditation practice, I can notice a space between a thought about something and the thing itself.  In that space, the world comes to me directly, and I can't find any difference between what I call "me" and the song of a bird, a flower's smell or a friend's smile of greeting.  If everything is indeed the Buddha nature, the awakened presence, we might say that the world is a huge reflecting mirror.   Everywhere we look, we catch a glimpse of our true self.

Posted by Melissa Myozen Blacker at 7:17 AM No comments:

Awakening can be a quiet thing

If you ever suspect that you should have had an awakening to true reality that was dramatic, full of bells and whistles, and just plain theatrical, here are Liza Minnelli and Kermit the Frog to reassure you:


Posted by Melissa Myozen Blacker at 7:16 AM No comments:

Tom Hall came and invited us to talk about Zen, improvisation and life for his podcast, which can be found at www.improvlive365.com. This is the first of a series. Enjoy!
Posted by Melissa Myozen Blacker at 12:25 PM No comments: 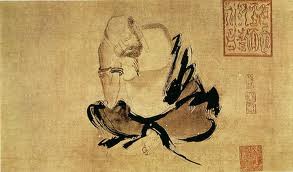 Yunmen once said, "When dew enters the willow tree, it becomes green.  When it enters the flower, it becomes red."  Aliveness manifests in each of us completely uniquely.

Last Sunday night I gave a talk about Huike, the second Chinese Zen ancestor, who stood in the snow trying to get Bodhidharma to pay attention to him, and finally cut off his own arm to prove his sincerity.  Whenever we talk about this story, we always give a warning, something akin to "don't try this at home."  Cutting off an arm may have been appropriate centuries ago in another culture, but today we strongly warn against such an act.

So  I suggested, during our dharma dialogue, that Huike was a bit "over the top:" demonstrating a form of effort that was too extreme.  After everyone had left, David gently disagreed with my comment, and suggested that Huike was doing just what he needed to do -- that his action was appropriate for him, and for him alone.   We agreed that each one of us has to find the right amount of effort to make in our meditation practice.  No effort at all may be exactly what is called for, especially if we're used to trying hard to accomplish something in our zazen.

In each moment we discover this right amount of effort.   Our present situation,  and our own condition, is constantly changing, and our task is to respond in some way to these situations and conditions so that our practice stays alive.  These days there is never an appropriate excuse for bodily harm,  but that doesn't mean that we can't throw ourselves into our practice with every cell in our bodies.  And at the other extreme, we may sometimes find that we simply need to throw ourselves into the loving arms of the Great Way, and make no effort at all.  Everything depends on conditions.  Everything depends on everything else.


Posted by Melissa Myozen Blacker at 4:30 AM No comments: 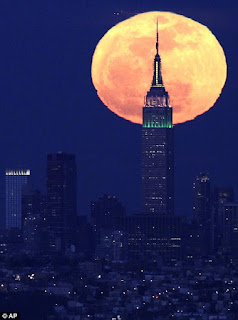 Passover began on the evening of April 6, and today is Easter for most Christians, and Buddha's Birthday for some Buddhists.  All these holidays herald the coming of spring, hope, renewal -- a confirmation of an aliveness we can recognize in every moment.  Each breath in is the beginning of everything, and each breath out the end of something.  This AP photo of the rare "pink" full moon on Friday night in New York City awakens us to this time when the whole earth is illuminated and all can rejoice in freedom and liberation from our old ideas.  Happy Birthday!