A Zen priest visits the Relic of the Holy Blood


On the last full day that David and I were visiting the lovely Belgian medieval city of Bruges, we encountered a miracle.  Well, sort of.  I am allergic to shellfish, and after feasting on some Belgian friet (the origin of what we call french fries, although Belgians are quick to point out that they should be called Belgian fries), I had a mild reaction, probably because shrimp and clams had been fried in the same oil.   As hives began appearing around my mouth and various other parts of my sensitive body, we started to make our way back to our AirBnB for some anti-histamines, when we passed the Basilica of the Holy Blood, a Roman Catholic church that contains the Relic of the Holy Blood.  The Basilica had been closed the last time we passed by, but now it was open, and there was a big crowd going up the stairs to the second floor of the church.  We made our way up the stairs to see what was going on, and found ourselves in front of an altar, presided over by a priest, and towards the front of a line that was about to be allowed to process by the relic itself.

According to the legend, Derrick of Alsace, Count of Flanders, was a crusader.  He received the relic of the Holy Blood in 1150 from his brother-in-law, Baldwin III of Anjou, who was the King of Jerusalem.  It's a piece of cloth, stained brown, in a small crystal vial, housed in a gold and glass casket.  Derrick built the Basilica in Bruges to house the relic, and for a few hundred years, the blood became liquid every Friday.  Once a year, it's paraded around Bruges, protected by 31 righteous men.

We got in line, and when it was our turn, put some euros in the donation box, bowed to the priest, and placed our hands on the transparent box housing the relic.  Although I am not a Christian, my eyes filled with tears.  Perhaps it was the saturated feeling of hundreds of years of worshippers, devoted to a belief in miracles and the spiritual guidance of a man who died two millennia ago.  I don't want to explain it away, but I was touched deeply.

David and I sat with the other worshippers, meditating in front of lit candles.  When a couple of them got put out accidentally, we stood to relight them.  And then we walked back out to the square to continue on our journey around the city.  My hives were gone.  Perhaps I had been healed by the Holy Blood?  Or by sitting quietly in a beautiful and silent devotional space?  Or by the miraculous human body that detected a problem and made its own anti-histamines?  David informed me that they had already started to fade by the time we entered the church.   I only know that I had a rare opportunity to experience something holy.

As we teach in Zen, everything is holy.  Everything demonstrates the wondrous Dharma, the teachings, reality.  Everything shines with its own light.  There are no exceptions.  The green bottle glistening in the sun, discarded by someone passing in a car on Pleasant Street this morning; the flowers in the garden; the noise of the traffic.  Pay attention -- the Holy Blood is right here, now...please don't miss it!
Posted by Melissa Myozen Blacker at 7:51 AM No comments:

Don't be deceived by others


This morning I was reminded by a student of this lovely koan case from the Gateless Gate collection by Wumen, number 12.  It was a special favorite of my first Zen teacher, and I have come to love it as well.  This wonderful teacher, Ruiyan, calls out to himself and answers himself.  Who is calling, and who is responding?

Each human being is complex and made up of so many parts.  Not one of us resembles anyone else who has ever existed in the universe.  And yet, we find commonality in the patterns of response we have to life coming forward.  Ruiyan reminds us that we can be humble about everything, including being a Zen teacher.  Who is the master to whom he calls out?  And every one of us, no matter where we are on the path, needs to remember to be aware.  Being deceived by others is the follow-up:  who are those others?  Could they be all of the voices of praise and blame we are subjected to on a daily basis?  The folks who adore us and the folks who are so irritated that even hearing our voice is grating?  And even more, perhaps, the internalized voices of judgment that arise endlessly.  Don't be deceived, Ruiyan tells himself, and us, in words that echo through the centuries.  Every voice of judgment is caught up in right and wrong.  Going beyond this, there is only what is arising right now in this moment -- which may, of course, be thoughts of right or wrong!  Everything shines with the light of Dharma.  We can be comforted by this teaching, and go on our way doing the best we can in every moment.  Are you aware?  Don't be deceived by others!

The Language of Dragons 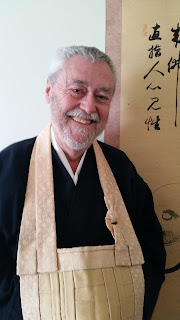 My teacher James Ishmael Ford, Roshi has just come out with his latest book, and it's a true treasure.  Called "Introduction to Zen Koans: Learning the Language of Dragons"  it is even more than what its title promises.  A comprehensive introduction to Zen practice, it establishes the context for koan practice within the history of Zen and the other great practices that accompany and deepen koan study:  breath and shikantaza (just sitting) practices.  James is a wonderful and down-to-earth guide to Zen, and especially to the style of Zen in which I apprenticed with him, both before and after he gave me Dharma transmission.  I owe him so much, and you owe it to yourself to read this wise and warm book.
Posted by Melissa Myozen Blacker at 10:49 AM No comments:

Back in the day, and I'm just talking about 1994, there were far fewer translations around of essential Zen texts.  Now there are many,  but I find myself returning again and again to some favorites from the last century.  One that has always kept me supported in my practice is the Swiss scholar Urs App's translation of the Sayings of Yunmen.

Yunmen Wenyan is a familiar character to anyone who practices with koans.  He lived in China in the 9th and 10th centuries.   His most famous comment, which is the text for the first official Dharma talk from a newly transmitted teacher in my school of Zen, is "Every day is a good day."

Shambhala Publications has recently reissued a revised and updated version of App's book, which had originally been published by Kodansha International:  Zen Master Yunmen; His Life and Essential Sayings. It's a beautiful production, and will, I have no doubt, be a wonderful companion to anyone who travels the Great Way.

Here is a quote from Yunmen's first talk in the Record. just to give you a taste:

"The knack of giving voice to the Dao is definitely difficult to figure out.  Even if every word matches it, there still are a multitude of other ways; how much more so when I rattle on and on?  So what's the point of talking to you right now?"

Indeed!
Posted by Melissa Myozen Blacker at 8:37 AM No comments:

I just returned from a trip to Europe, where I taught some retreats and workshops, and also did some sight-seeing.  In the beautiful city of Bruges in Belgium we visited the Monasterium De Wijngaard, or the Beguínage, a peaceful refuge for Benedictine nuns.  In former days this cluster of small free-standing rooms surrounding a small wooded park was a retreat center for non-ordained women, the Beguínes,
who had left the world to be in direct contact with God.

The nuns who now live in the monastery invite everyone to pray with them four times daily, and we were lucky enough to sit with them during vespers.  Just a few old women in their brown and black habits chanted in high melodic voices, absorbed in their devotions while tourists quietly came and went from the church of St. Elizabeth.

The nuns provided little flyers for the tourists, full of prayers and devotions, for use during the services.  One that was unfamiliar to me, and that deeply touched me, was written by the English Christian writer Frances Nuttall (1892 - 1983) called the "Prayer of the Chalice."  You can easily google the original if you're interested.  I revised it for my own use and humbly offer this new, non-sectarian version below.  Perhaps it will give you a flavor of the experience we had in the lovely church, in the late afternoon, listening to the sweet voices chanting their devotions.

To the Great Light I raise my whole being,
A vessel emptied of self.

Accept this my emptiness, and so fill me with your light, your love, your life,
That these precious gifts may radiate through me
And overflow the chalice of my heart
Into the hearts of all with whom
I come into contact this day.

Revealing unto them the beauty of joy and wholeness, and the serenity of peace which nothing can destroy.


Posted by Melissa Myozen Blacker at 3:26 PM No comments: