I was quite inspired by this address on climate change from Roshi Joan Halifax, which I have copied below.   She states the situation clearly, and makes suggestions for action.  Thanks Roshi Joan for your clarity, compassion and chutzpah!

My name is Roshi Joan Halifax. I am a Zen Buddhist priest and Abbot of Upaya Zen Center in Santa Fe, New Mexico. I have been a social activist since the 1960’s and know first-hand the power of the people in mobilizing responsible moral and social change.

As a woman, a Buddhist, and an elder, I am standing here today in solidarity with the younger generation, people of color, indigenous peoples, and those fleeing war and the climate catastrophe, all of whom will disproportionately bear the burden of climate devastation.
I am also standing in solidarity with you, all of you. Every one of us, our children and grandchildren, no matter how great our privilege, will be affected by this unfolding climate catastrophe.
We must awaken, collectively, to the fact that the primary cause for climate change is fossil fuel dependent economic growth, primed by human greed, ignorance, and the perverse incentives of capitalism. Fossil fuels are a finite, dangerous, dirty, and destructive source of energy. For us to continue to depend on fossil fuels is life-destroying and immoral, no matter how you look at it.
We live in an interdependent world, and cannot deny how profoundly damaging this energy source is to the individual and collective health of all species. It is absolutely necessary that we revolutionize our intertwined energy and economic systems. And we have to do this now from a space of courage, compassion, love, and wisdom.
And yet, thus far, we haven’t. Why? Fossil fuel companies are focused on making a profit, and they have bought politicians, derailed the media, lost their moral compass to cronyism, and subverted our democratic processes so that they can continue to profit, no matter the cost to the environment and humanity.
And listen carefully: there’s a reason why predatory corporate and financial elites promote a focus on individual behavior, like recycling or energy saver light bulbs, and also why they support autocratic regime change, which ends up causing gross economic and social inequality. These forces of capitalism do not want us to realize that we need fundamental systems change, including making our government enforce checks and balances on the companies profiting from polluting our earth and condemning our future. They know that thriving democracies with active citizens are a threat to them; and, hear me clearly!: We need to behave like a thriving democracy, or else! 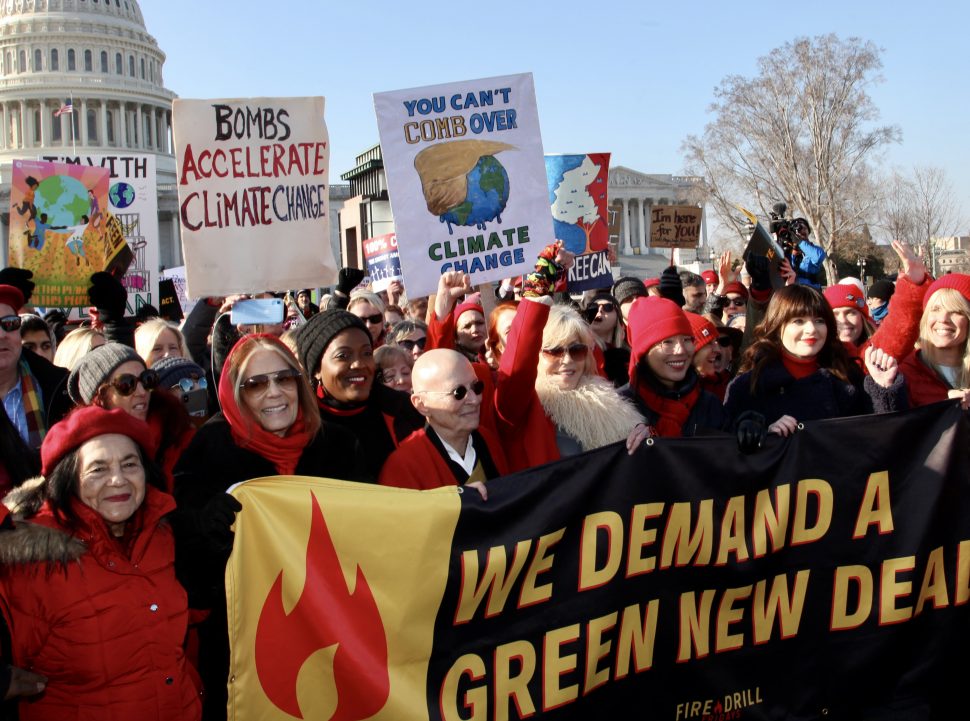 Marching in Washington, DC: Dolores Huerta, Gloria Steinem, Heather Toney, Roshi Joan Halifax, Jane Fonda. Photo by Fire Drill Fridays, 2019.
We also have to wake up to the fact that the climate crisis is making us sicker and sicker every day.
Our air has become a toxic harbor for increasing allergens, mold, fungi, smoke, mercury (a neurotoxin for fetuses), petrochemical cancer-causing poisons, choking dust, disease bearing insects, and extreme heat.
Our water is a toxic harbor for endocrine disruptors, poisonous chemicals, microbial pollutants, including sewage and lethal algae bacterium; as well, plastics are wiping out our oceans and fisheries, sea water is contaminating our drinking water; and drought and flooding are destroying forests, farmlands, and cities.
But maybe the most insidious and least talked about area of sickness is the profound trauma and bottomless grief being experienced by millions whose lives are shattered by floods, droughts, fires, and heat waves caused by climate change.
Extreme climate heat is also linked with aggression, and connected with violent conflict and forced migration, another source of profound trauma, as well as moral injury for millions of people.
Then there is the pernicious psychological suffering experienced by those who witness the terrible degradation of life associated with our climate catastrophe, and the moral anguish experienced in response to the aggressive assaults on the dignity of those who raise their voices in protest and who are bullied and dehumanized by politicos, fake news reporters, and those who profit from this devastation.
We must ask then: who will make the change? Clearly, every one of us must! Whether faith leader or farmer, politician or policewoman, kid or grandmother, we must demonstrate in solidarity for those who are on the frontlines of climate change impacts and hold accountable the perpetrators of climate-caused suffering.
Lawyer Mariel Nanasi, President of New Energy Economy, writes: “We are at a crossroads. We either face the very real possibility of a planet on hospice, driven by an energy system that is the epitome of capitalism on steroids with extreme exploitation and racism at its core. Or a profound opportunity to shift at the very basis of our economic system that we haven’t seen since the abolition of slavery. And it’s really up to us which way we go.”
The first 200 years of capitalism were based on slavery; the second 200 on fossil fuels; and the next 200 must be based on renewables, if we are to survive. If we could abolish slavery on which our country was built, which involved the sacrifice of hundreds of thousands of lives, we can respond to the climate crisis and abolish the use of toxic fossil fuels, as well as transform the economies of injustice into economies of peace. Just as the abolition of slavery was the morally right thing to do in 1861, ending fossil fuel use, whatever the cost, is the moral imperative of our time. And we can do this!
As I said, we need to function as a thriving democracy. What happens in a thriving democracy? People VOTE. It’s the single thing that almost everyone can do regardless of station. And it’s the most important thing at this point. Clearly, we need to get this administration out of office, and people need to vote for principled candidates in next November’s election and get their friends and family to vote and help get out the vote and they need to start now! Phone banks, canvassing, financial contributions to democratic candidates in swing states.
For every voter the Republicans purge from the rolls, we need to register two new democrats.
The next thing people can do is contact their elected representatives. Flood them with calls and letters. Tell them to support the Green New Deal. The only thing that will counter corporate power is a steady and overwhelming expression of people power.
Another thing we can do is support the organizations on the front lines: the Sunrise Movement, Extinction Rebellion, Environmental Defense Fund, Environmental Law Alliance Worldwide, the League of Conservation Voters, the National Resource Defense Council, Fridays for Future.
Join, give money, volunteer. And talk to friends. Share concerns and ideas. Organize. Protest. Engage in civil disobedience. Action breeds hope. Without hope we have no future but if everyone acts, there is something to hope for. 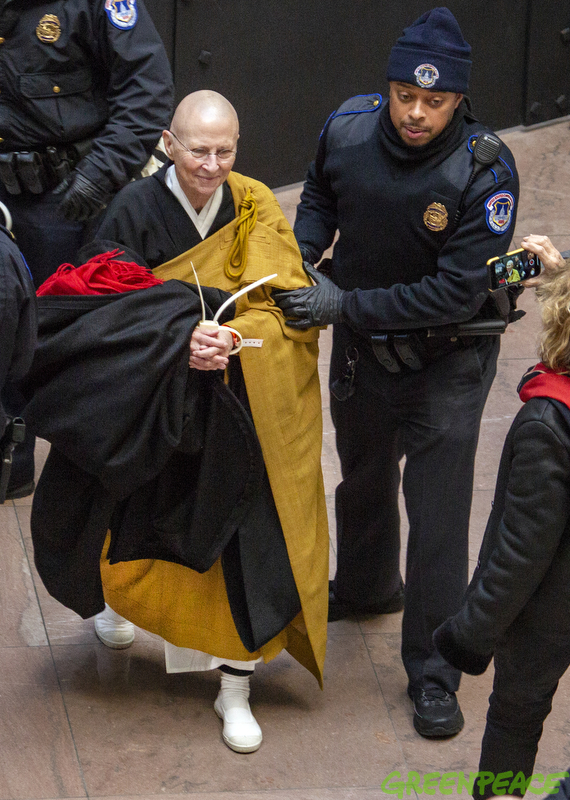 Roshi Joan Halifax arrested on the floor of the Hart Senate Office Building as an act of civil disobedience during the eleventh Fire Drill Friday, Dec 20, 2019. Photo: Greenpeace.
And you and I must take action now, if there is to be a viable, morally grounded, and healthy future. We have to take the science seriously, and hold accountable the petrochemical, corporate, military, and political pirates who are stealing the future from our children and grandchildren.
We must take a stand now for ending the structural violence associated with our climate catastrophe.
We must rise up together, in solidarity with young people, indigenous peoples, people of color, and meet this collective crisis with moral nerve and committed, compassionate action.
And we must not cower behind walls of privilege that we erect out of fear. Fear, denial, and futility are not options at this critical time.
Rather, we must vote, act, support, and wake up now, wake others up now, and be a revolutionary force for a sane and healthy future for all beings.
Joan Jiko Halifax
December 20, 2019Washington, DC
. . . . . . . . . . . . . . . . . . . . . . . . .
Grateful to Jane Fonda and Jodie Evans for making it possible for me to be a part of this extraordinary event. Thanks to Dekila Chungyalpa, David Cantor, Sydney Cooper, and Daniel Smith for reviewing, editing, and adding important insights to this talk.

Posted by Melissa Myozen Blacker at 1:28 PM No comments:


On Saturday, December 14, Kristine Togneri, a long-time member of Boundless Way Temple, took the sixteen Bodhisattva precepts in a ceremony witnessed by the Temple community and her three children, Charles, Elise and Sophia.  Kristine had sewed her rakusu, the ceremonial garment worn as a symbol of her commitment to the path of Zen.   She had been helped by one of the Temple's sewing masters, Corwyn Miyagishima, who also provided delicious almond cookies for our post-ceremony party.  David Rōshi and I gave her the precepts and a lineage document, showing her connection to the line of ancestors traced back to Shakyamuni Buddha 2600 years ago.  And we gave her the Dharma name Vital Compassion.  She wrote and read aloud beautiful and thoughtful responses to each precept.  Congratulations Kristine!
Posted by Melissa Myozen Blacker at 9:28 AM No comments: